Korean BBQ on the Verge of Spring. 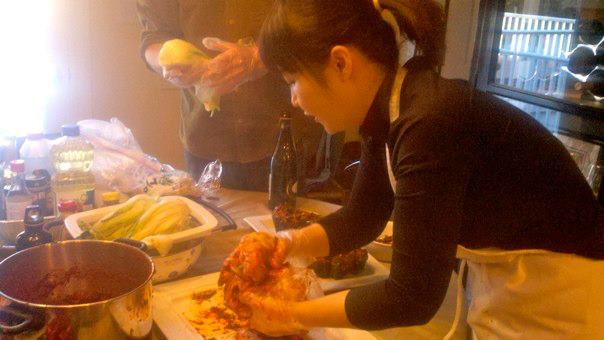 Chef Sunny Lee is from Seoul, South Korea. She came to the United States with her son to ensure that he would adjust well to his first year as a high school freshman in a foreign country. To occupy herself in her spare time, she began taking recreation cooking classes at the local culinary school where she found she had a passion for cooking. It wasn’t long before she enrolled herself as a full time student in the Cambridge School of Culinary Art’s professional chef program.

After graduation she remained dedicated to mastering every dish that came her way and took a job working long hours as a pastry chef at one of Boston’s critically acclaimed fine dining restaurants, L’espalair. Sunny is planning on eventually returning to South Korea soon where she hopes to open up an “American style cooking school”, but before she does that we had the privilege of her instructing us on some of the traditional dishes from her home country.

Kimchi is a dish that is synonymous with Korean culture. It is a fermented dish that can be made with different types of vegetables but is mainly made with baechu (or more commonly, nappa cabbage). Typical the cabbage is brined in water and salt first and then is left to ferment in a mixture of garlic, salt, vinegar, chili peppers, and other spices. While some prefer kimchi fresh others prefer an aged kimchi which can age well close to a year. While the preparation of kimchi varies from region to region, traditionally in the southern area, it is spicier and does not consist of any fish product.

It is typical for women to gather in the home at the beginning of winter and make mass amounts of kimchi in preparation for the cold weather. Growing up, Sunny recalls having a dedicated refrigerator in her home just for kimchi. It’s a versatile ingredient that can be incorporated into many different dishes such as stews, on top of a pizza, or as a side dish, to name a few, which isn’t all that bad considering that it is loaded with vitamins and contains the same time of “healthy bacteria” that one can find in yogurt.

Another delicious dish we prepared was La Galbi (or Korean BBQ).

In Korean, Galbi means “rib” and more often than not refers to short ribs. Typically when we think of short ribs, we think of big beefy chunks of slow cooked meat that is “fall off the bone” tender. In this version the short ribs are treated a little different. They are sliced lengthwise in thin strips before being marinated. The typical marinade for this dish consists of soy sauce, sesame oil, ginger, pear, pepper, honey, sugar, and water.

After cooking is complete, usually on the grill, the small amount of bone is sliced away from the meat which is then wrapped in either a lettuce leaf or sesame leaf with a little gochuijang or hot chili paste and eaten as an accompaniment to rice. In a lot of homes in South Korea, rice and sometimes kimchi, is served with every meal.

A Sesame leaf. From the leaves of the perilla plant.

Korean is a cuisine that is noted for its side dishes. It would not be odd to see someone dining with many assorted bowls in front of them. Each meal is, more often then not, served with rice.  Unlike in China and Japan, the person dining is given a spoon, so the bowl is not lifted from the table. While using spoons, culture dictates that the spoon should never make a noise or touch the plate. It is also custumary when drinking to hold a glass with both hands for someone to pour a drink into your glass. One is never to fill their own glass and is to never fill a glass that is half empty. The Korean culture is rich in drinking tradition. The most popular non-alcoholic drink in South Korea is tea or what they call “cha”. Alcoholic beverages are also very popular, especially during business meetings. Koreans believe that you reveal your true self when you are drinking and therefore if you are drinking during a business meeting it is a sign that you can be a trusted business partner. Their major crop in Korea has been rice, therefore, most alcoholic beverages have been made from rice of both the glutinous and non-glutinous variety. Yakju is an example of a rice wine that is made from steamed rice that has gone through several different stages of fermentation.

1/3 cup of water or cooking wine

Event planner extraordinaire, Marisa Barr, recently took a well deserved vacation to the South of Spain where she visited her brother, Phil, who is studying abroad. Here she shares with us their foodie adventure and the differences between eating in Spain and The USA.

*Jamon Iberico hung like this above all of the bars. They take it down and slice it to order!

One of the first things I noticed upon my arrival to Sevilla, Spain is that Spaniards really do “live in the streets”. And why wouldn’t you? With the sun shining it was a beautiful non-humid 70 degrees for every day of my trip.

The next observation I immediately had, was that everyone drank and ate at any and all times of the day. Meals were not simply limited to breakfast, lunch, and dinner. From the woman who was sipping a glass of wine while holding her baby, to the elderly man smoking a pipe with a beer, to the businessmen in their suit jackets huddled around an elevated table with their scotch, whether it be 10:00am, 2:00pm, or 11:00pm, drinking and eating seemed to be the center of their lives in Spain, and more importantly what drinking and eating created: being surrounded by family and friends. It was not simply treated as a necessity, but more as a way of life.

I instantly knew I was going to like this place.

I started each day with either Jamon Iberico (Ham from an Iberian Pig) on a toasted bagel doused with olive oil, or a toasted bagel with olive oil and a tomato spread. Along with a café con leche and an orange juice I was all set. I’m a little disappointed to admit I was not on the Spaniards level of having a glass of wine or a beer with my morning meal and was instantly overcome with a wave of guilt over my exasperation towards my foreign guests at the restaurant where I worked who seemed so perturbed by our American coffee with a side of cream. Café con leche, or coffee with milk in Spain—is really espresso, and they take the liberty of steaming and adding the milk to it for you themselves.

One of the greatest things about wining and dining in Spain is that they make it very easy for you to do so.  With much smaller portions than what we are accustomed to in the United States, it is possible to drink and eat many times throughout the day without getting uncivilly drunk or outrageously full. Three course meals are available for lunch (the biggest meal of the day) for anywhere from 7-12 euro at a restaurant. Many people choose to go home and eat in front of the televisions with their families during lunch time, anywhere from 2:00-5:00pm when most local businesses are closed for siesta. (it is socially acceptable to eat, drink, and sleep during these hours…amazing, right!?)

These portion sizes give the luxury of being able to taste many different things and spend time with many different people throughout the day. I can honestly say I did not get drunk or full once throughout my excursion in Sevilla. I was constantly contented.

All of these dishes are local to the area, and my brother warned against signs advertizing paella “a typical tourist trap!” he said, as it really wasn’t very popular in the South of Spain.

The tortilla would be heavier in some places, creamier in others. The spinach more creamy in some, more pureed or whole, spicy or wet, but all of the ideas were the same. Fresh, untampered with local ingredients in delicious food.

And the correlation of each meal is the same: to bring together people you love. Whether it be friends on the streets over a pitcher of sangria or cousins and aunts and uncles and sons and daughters and mothers and fathers at home in front of the television with a steaming bowl of soup, Spaniards are always eating, drinking, and TALKING with one another!

They live in the moment, and as a bonus, with all the walking in the city (it is nearly impossible to fit a car down many of the old streets) I found I lost three pounds during my eating and drinking escapades!

I’m telling you, Spain has the right idea!

Now if only I could find a traditional gazpacho, followed by a luscious flan and a glass of vino tinto on a patio in Boston at noon…

-Marisa Barr is a graduate of Northeastern University in Boston, MA and is a writer, food lover, function coordinator and event planner.

Part of growing means being able to accept the changes that go along with this process. As you grow, you are constantly learning faster and more efficient ways of doing things. You learn new tips and tricks that make your day and life, in general, easier. In the case of our business, this is no different. Over the last couple of months we have grown rapidly which means we’ve made a lot of exciting changes! Our social media presence and blog have been part of these changes. So, if you happen to stumble upon us on the web in the next couple of weeks and realize that things are looking a little different from the past, don’t be alarmed!

Even though growth does mean an exorbitant amount of change, it doesn’t necessarily mean that EVERYTHING has to change.  There will always be things that stay the same and things that remain constant. I like to think of these things as the salt and peppers of life.  No matter what changes you makes, you will still always need your salts and peppers. Coincidentally, a few weeks ago, our staff was treated to a salt and pepper tasting. While it sounds simple, it actually was an experience that blew our minds. To find out that there were so many different types of salt and peppers, it left our foodie minds all giddy with possibility.

In the next couple of weeks, we will be blogging in installments about the different types of salts and peppers that we’ve tried, about how we’ve incorporated them into our dishes, and especially about our favorites.

In our first installment, i’d like to highlight what has seemed to be the fan favorite of our staff; Viking Smoked Sea Salt. I was thrilled to be able to take a sample of this home to share. Trust me when I say, this particular salt has a STRONG flavor. If you open the container and take a good whiff you’d swear that you were at a bonfire. A Salty delicious bonfire!!! We can thank the vikings for devising the style in which this salty treasure is obtained. It’s made by evaporating seawater in a vessel over an open and smokey fire that contains juniper, cherry, elm, beech, and oak.

My favorite application has been using this salt to season sauces. It definitely adds a different depth that you wouldn’t be able to obtain with your more generic salts. Heed my warning though, A little bit goes a long way!!!